When things go sideways...an adventure on a tropical island 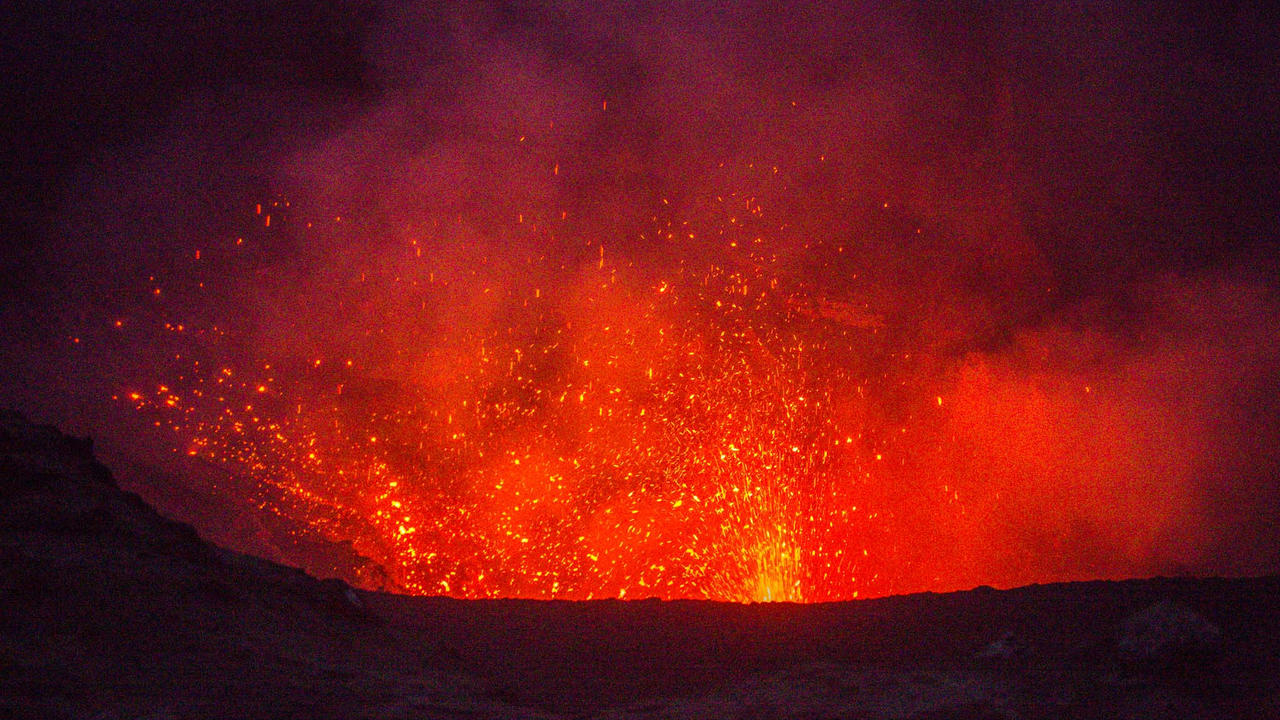 "In every journey or adventure, there will be the unexpected, the low points, the funky stuff that happens. This is true for travel or for life. And there are always lessons to be learned."

February is the month of love. And because of that, I decided it would be a theme of self love. And since my blog is live again, I thought I'd repost this story as this adventure taught me so much about loving myself amidst being terrified and making decisions. I also learned a lot about forgiving myself.

Three years ago my husband and I visited my son and his family in the tiny South Pacific nation of Vanuatu. We were stoked to be so close to an active volcano. The events that happened were, shall we say, a little scary? 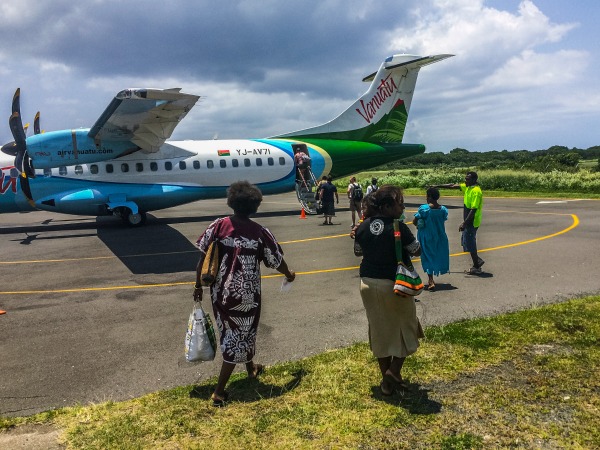 It all started a little bit wonky, the beginning of our trip to see the live volcano on Tanna in the South Pacific island of Vanuatu.

That tropical morning we got off the plane from Efate, the main island of Vanuatu, and arrived by plane an hour later on the island of Tanna. I pulled out my reservation sheet and for the life of me could not find the name of the hotel we were booked in. There were people everywhere, pushing, shoving, loading up people and baskets in trucks.

A Ni Vanuatu man ran up to us and grabbed the papers out of my hands. I’m not even sure he could read English but he said something like ”you got the voucher, come with me.”

Suddenly he was hoisting our backpacks and belongings into the bed of a pickup truck and we were hopping up, too, into the back of the truck along with a young French couple and lots of other people. It was thrilling to be able to ride in the back.

There were 14 people all crammed into one vehicle.  Several tourists were squeezed into the double cab truck and the rest of us in the back. Everyone was laughing & smiling.  We were all happy & ready for adventure. 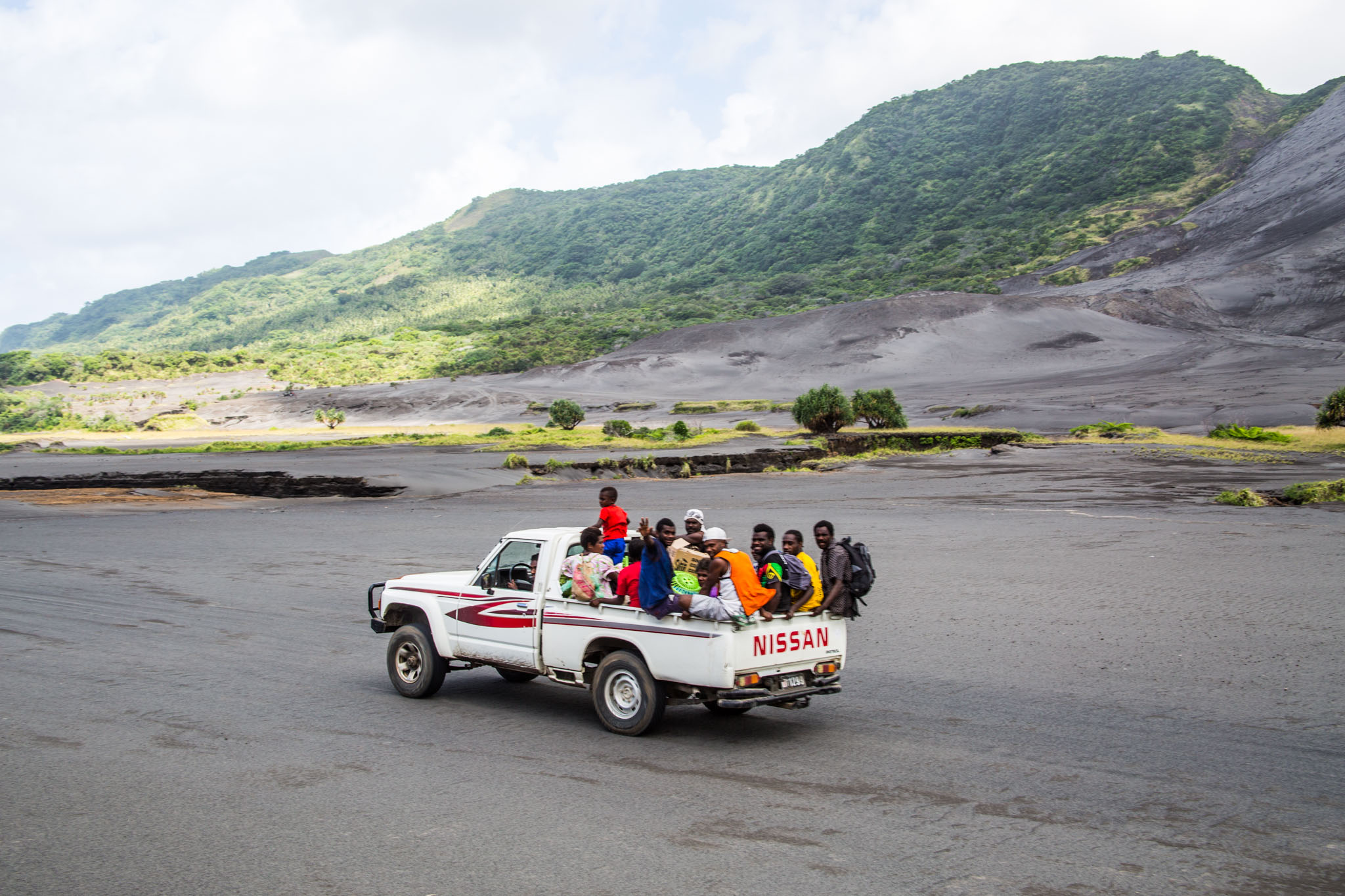 And as we rode for three hours on the island towards the volcano, I felt free and brave, and like a kid. 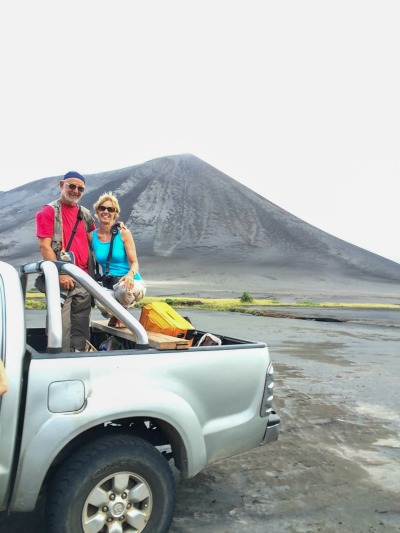 Little did I know what was to come.

The coral road was in appallingly bad repair and full of potholes and bumps.  There was nothing to do but laugh when we bounced up in the air. The photo below shows a short distance where the road was paved. It was a gorgeous day. 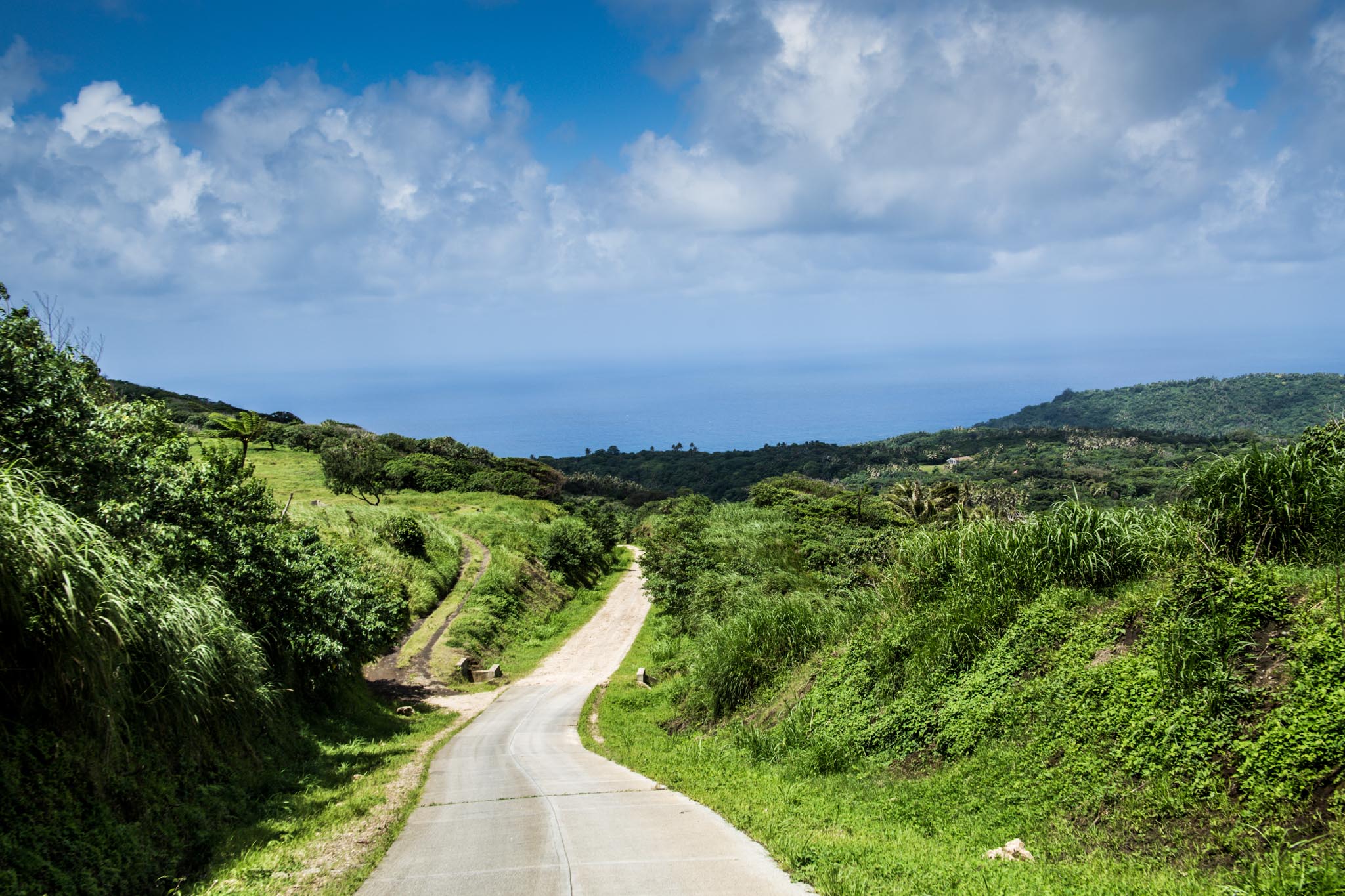 My husband whispered in my ear, “well, they’re probably taking us to the volcano and then they’re gonna boil us up in a pot afterwards.”  Perhaps they were tenderizing us in order to get us ready for the boiling pot.  We both snickered.

Vanuatu was known for cannibalism…back in the day.   The last reported case was in 1969.  And some expats who live there say they’re not quite sure of what goes on in some of the outer islands.

We were in one of those “outer islands.”

Still, I felt completely safe.  I had lived in Vanuatu for five years over twenty years ago.  And I always felt safe.  Then.

We arrived at the Treetop Hotel which consisted of five very basic thatched roof houses with steep stairs leading up the tree where guests spent the night up in the trees. 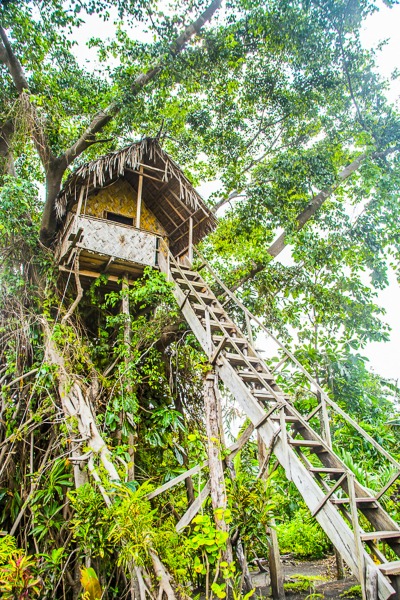 By now I had located the name of our hotel. I explained to the Ni Vanuatu men who brought us here, “hey, we’re staying at the Hidden Treasure Hotel, not here.”

The three Ni-Vanuatu men scratched their heads and looked dumbfounded when we told them.  They said our hotel was two hours back near the airport.  What ????

Later we discovered that these particular individuals had a habit of abducting tourists from the airport to stay at their hotel.

Once again, an image of a boiling pot came into my head.

My husband, Thom, and I had a few snarkey words.

He said,  “I told you that was not the right hotel truck…it had Treetop Hotel on the side of the truck.”  Me, I was thinking, they’ll drop us off at our hotel. Where I came up with this idea is illusive to me now.

There was nothing to do but wait until the truck came back to take us up to the volcano. We waited for two hours and sat in the two hammocks on the Treetop property,  devouring the snacks we brought as we knew there would be nothing to eat anywhere else.

We both chalked up our dilemma to being in a third world country and applauded ourselves for being flexible.

After all, we were on an adventure, right?   We would get to our hotel later, after we had visited the volcano.  Somehow. 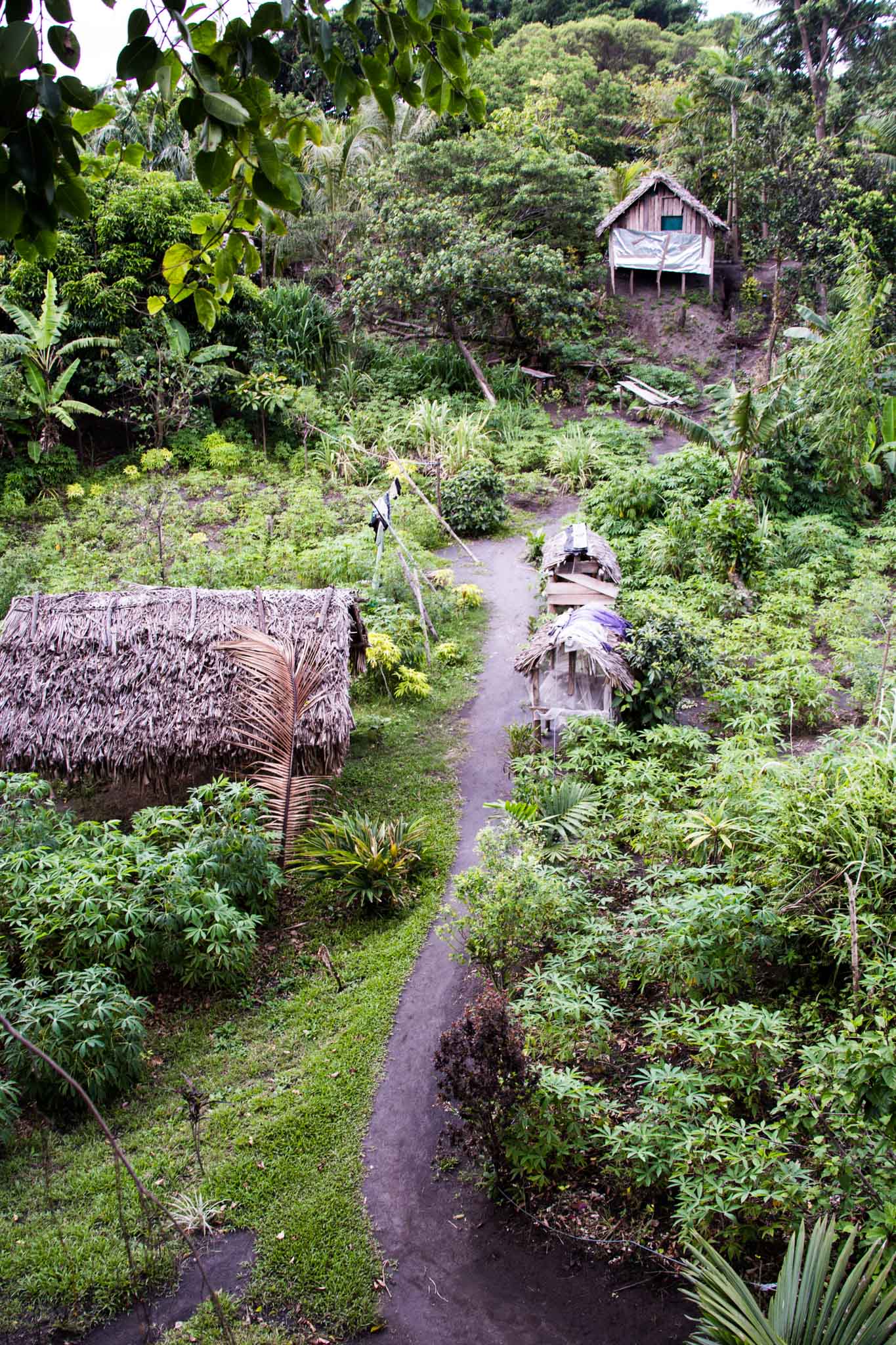 One of the men from the Treetop gathered us together and told us that we would now begin walking up to the volcano and that the truck would come pick us up.  We walked with three  other couples who were legitimately staying at the Treetop; none of us knew how far we'd be  walking. Later we discovered that there was no truck.  Fortunately, Thom & I hopped on the back of a passing truck while the other guests good spiritedly kept walking the one mile hike up to the volcano.

Mt. Yasur volcano did not disappoint. 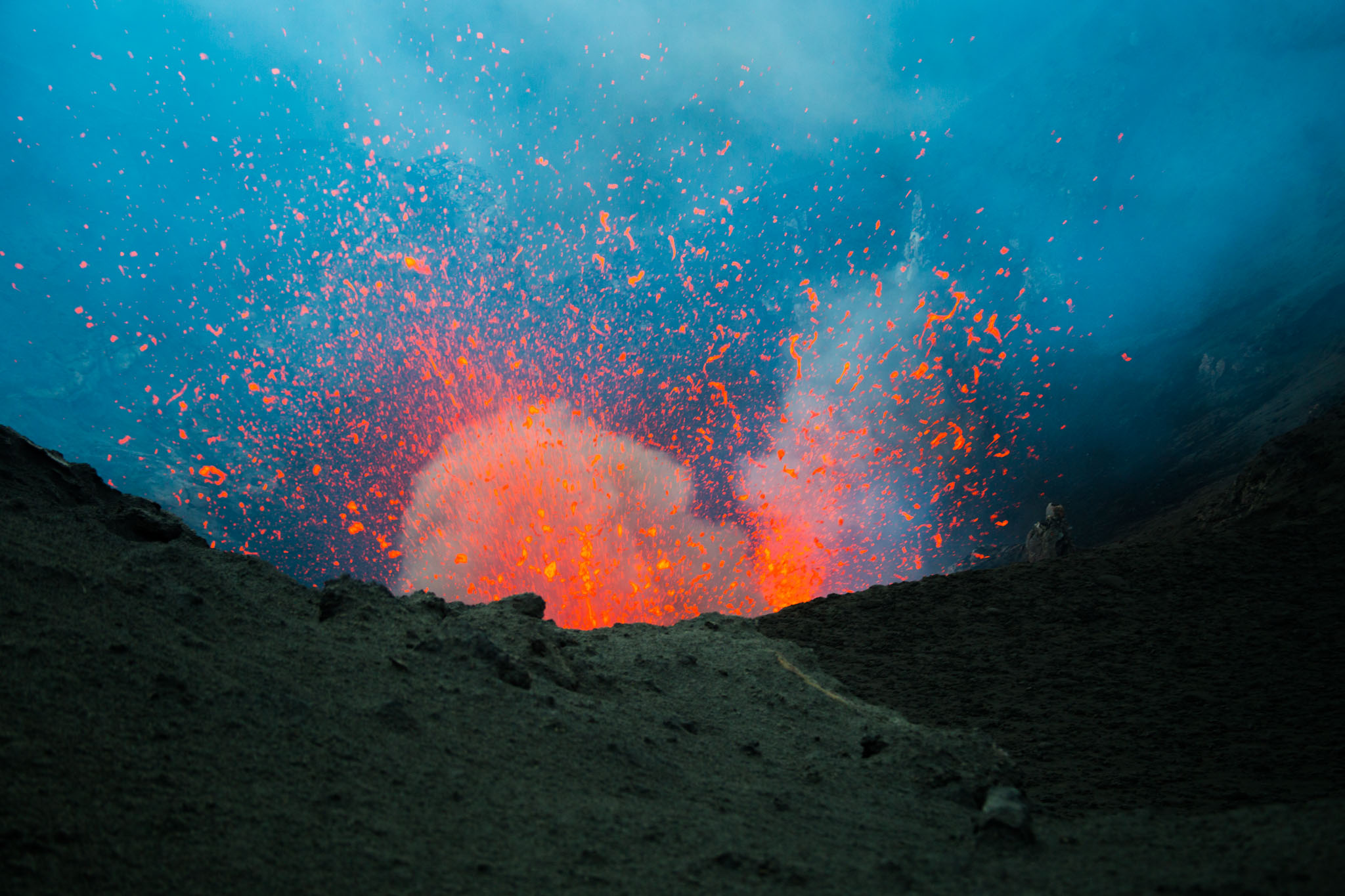 It was one of the most spectacular adventures of my life.  And standing on the edge of this volcano was thrilling and terrifying.

As night fell, everyone started getting into trucks to return to the places they would sleep that night. We agreed to pay one of the drivers $50 to take us to our hotel. At this point, I didn't give a flip about how much it cost. We had just had a riveting experience of being so close to an active volcano.

It was dark now and we just wanted to get back to our hotel, take a shower, and savor the events of the day.

After riding all day in the back of the truck, when the last tourists had been dropped off at their "hotels," we for the first time that day hopped into the truck cab, encouraged by the two remaining Ni-Vanuatu men.

I left my backpack in the bed of the truck which contained nearly all my belongings, including my wallet. Thom left his very expensive camera in the backpack as well. It was odd, since he always, always has his camera around his neck everywhere he goes.

But he was tired, we knew the roads were hideously bumpy, we knew it was going to be a long ride, but we were trusting AND we let our guard down.

One of the men said, it’s okay, you can leave your stuff in the back.”  So we did.

About an hour into the drive to the hotel, the driver stopped the truck in the middle of the road, turned off the engine and lights, plunging us into pitch blackness.  Everything was dead silent.

I looked over at my husband whose face I could barely see although he was right next to me, looking for reassurance.  At least we were together, I told myself.

After what seemed like a very long time, I heard the driver say, “we just need to get petrol.”

The “gasoline station” was a large white plastic tub with a spout on the side of the road. That much I could see when they turned the headlights back on.

Thom told me later he had already planned a defense in case this was the moment we were to be taken to the boiling pot.

He would use his tripod to fend off the aggressors by whacking them with the tripod while I made a run for it into the jungle.

Looking back, I realized that this moment was a scary point in our debacle.

We were in a pickup truck literally in the middle of nowhere (I am not exaggerating) and no one knew where we were with three large island men that we didn’t know from Adam.  Naively, I still did not feel afraid.

We drove on for another hour, across gutted roads full of rocks and boulders.  By now my body had grown used to the side to side sway and the constant bumping up and down.  All I wanted to do was get to our hotel and lay down. It had been a very fun day but I’d had enough.

We arrived at the hotel.  At last.  It was 11:00pm.  We moved to the back of the truck to get my back pack and purse out of the bed of the truck. I stared in disbelief.

The bed of the truck was completely empty. 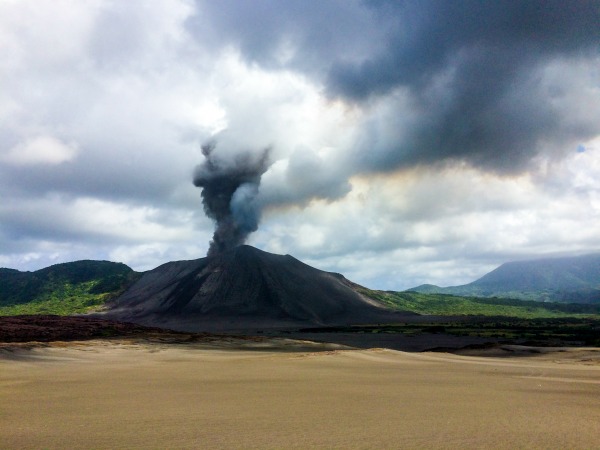 Stay tuned for the rest of the story next week…

Join the conversation below in the comment box. When have you been in a situation where you didn't know what would happen next and what did you do?